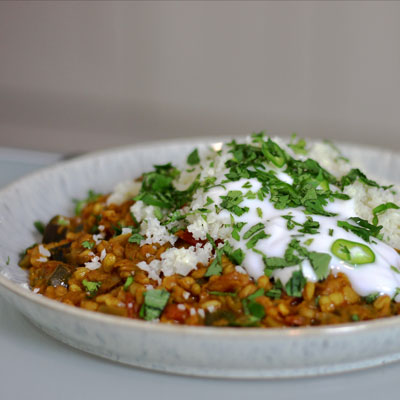 Recipe by Jess from Jess Beautician

This healthy and warming stew is a wonderful idea for a family dinner or an intimate dinner party.

1. First heat the oil in a large pan, then chop up the onion. Add the onion to the pan and cook that off until soft. Mince the garlic, add that to the pan too and cook it down, then grate in the fresh ginger.

2. Chop up the aubergine into small cubes, add that in next and allow it to cook down for around 3 minutes. Meanwhile, chop the courgette into small cubes and add that to the pan followed by the cayenne pepper, cumin, coriander, turmeric and the curry powder.

3. Give it a good mix and again, leave it to fry off for a few more minutes before then adding in the tomato puree.

4. Rinse the Mr Organic Pearl & Spelt Barley, Split Red Lentil and Mung Bean Ancient Grain Mix under running water, drain then add that to the pan, turn it through everything and then add the chopped tomatoes, coconut milk, vegetable stock and season it well with salt and black pepper.

5. Bring that up to a boil, then turn the heat back down and leave it to simmer on a gentle heat for around 35 minutes.

6. Meanwhile, make the cauliflower rice by trimming and quartering the head of the cauliflower, then put that on to steam for 10 minutes. After 10 minutes, transfer it over to a food processor and then pulse it until it breaks up.

7. When the curried stew is done and the majority of the liquid has cooked down, serve it with the cauliflower rice, coconut yoghurt, fresh chopped chilli and coriander.

Which of our products do you need for this recipe? 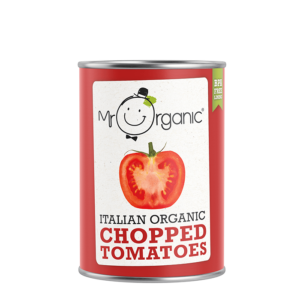 Get stuck into is this delicious satay, lifted with lots of spices in creamy coconut milk.

This is a quick and healthy treat with amazing flavours and textures.

This risotto is perfectly elegant thanks to smooth and creamy pumpkin, which pairs amazingly with our Indica brown rice.